We are releasing our in-game store today for Alpha players to test content and provide feedback in preparation for our August 31 launch. The store will allow in-game purchases for cosmetic items outside of our deluxe edition and pre-order bonuses. We have received a lot of feedback already, and believe it’s important to make the store visible now for players to experience and test directly.

Items in the store during Alpha will be purely cosmetic and provide no gameplay advantages. As the game evolves, we may add new categories of store items based on our players’ desires. We may make mistakes which is why we’re testing and engaging with our community to solicit feedback. The Alpha store test will include an example skin, emote, and dyes (these are not the exact items we will sell when live, but give you an idea of the type and flavor).

We think it’s important to share the goals behind our in-game store design so our players can understand our intent and to establish a foundation for open dialogue on this topic.

OUR PLAN
Our plan for having an in-game store is to create an outlet for players who find enough value in store items that they are happy to purchase them. Our plan is not, and never will be, to create a feeling that store items are necessary to enjoy or compete in the game. We have three main goals for the in-game store:

EMPOWER EXPRESSIVE PERSONALIZATION
The cosmetic items sold in New World are built to provide additional opportunities for players to shape their characters. Releases will showcase new dyes, apparel & weapon skins for players to customize their character, as well as themed decorative furnishings and additional house pets players can purchase. Cosmetic items will not provide any perks or boosts to stats.

While the in-game store will provide additional opportunities for customization and feature unique cosmetic items, there is a wealth of visually diverse in-game loot for players to discover and earn across Aeternum, at the same level of aesthetic quality with items found in the store. Our goal is not to make the cosmetics offered in-store better, but different than existing gear. We understand players work hard to get their gear and have no intention of diminishing the value of their favorite pieces. Often the store items are additive for role players and players who like to change their appearance frequently.

Below are some examples of gear found in game versus purchasable in our store. 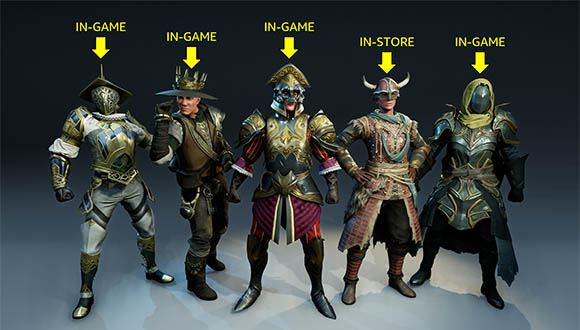 At launch we’ll offer themed cosmetic items across a variety of categories, visually on par with our endgame gear, such as:

Themed Apparel & Weapon Skins: Themed skins that can be applied to existing apparel or weapons to change their visual style.
Housing Décor & House Pets: Decorative home furnishings and fun pets for your home.
Emotes: New ways for you to express yourself through dance, gestures, and other unique animations.
Dye packs: While many vibrant pigments are available to harvest to create dyes, additional colors will be available in the store.
Company Crests: New designs will be available in the store to personalize your Company’s insignia.
We won't consider selling anything other than cosmetic items until 2022 at the earliest.

MAINTAIN A LEVEL PLAYING FIELD
The in-game store content will not give players an advantage in PvE or PvP gameplay. Our goal is to not provide anything that players find to be “pay to win” for in-game store offers. No items in the store will give players instant lifts to their overall gear score, experience points, or impact territory control. No item in the store is a gate to experiencing game mechanics. Players should never feel they have to spend additional money to experience New World once they’ve purchased the game, as the price you pay at launch lets you play the entire released game.

EMBRACE VETERANS AND WELCOME NEW ARRIVALS
While Aeternum will be full of veteran players, we anticipate new players landing on its shores for years to come. Well after launch, we will consider ideas for items that influence mechanics like rested XP both through the store and earned in-game. This would allow late-to-the-game players entering Aeternum to catch up at a pace most comfortable to them and fight alongside their friends in endgame content, while not creating a “pay to win” environment. The more players that are able to experience endgame content and participate in endgame modes, the healthier the game experience will be. The timing on when we release any sort of boosts would depend on player sentiment, feedback, and how we see new players progressing through the game well after launch. If we decide to implement these types of items, they will also be obtainable through in-game methods.

LOOKING AHEAD
Heading toward launch, we’re excited to test the functionality of our store and receive feedback on the items sold within it from our Alpha community. Data from the Alpha test, as well as the feedback from the testers themselves, will be studied closely and tuning will be done to the store and content as we prepare for launch.

The launch of New World is just the start. We plan to consistently ship game updates with new content drops for years to come. We hope you’ll join us on the shores of Aeternum when New World releases on August 31.

Thanks again for all of your help and support!